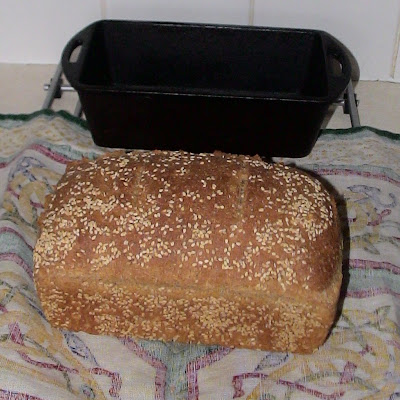 Bread day. Recipe is already here. It just looked so glorious that I took a picture.

One thing that I have now entered into the annuls of Kitchen Lore is that a heavy, cast iron bread dish is absolutely the best thing in which to bake the loaf.

A wok is your friend. Not as good a friend as the Bamix or the Pressure Cooker, but it’s right up there toward the top of the social pecking order. But my goal here is not to convince you of the merits of a wok. Oh no…your path toward understanding is your own to tread. The wok merely serves in this case as a single physical manifestation of the goals we set ourselves in order to move along the path. It is the challenges, false starts, and the lessons we learn through overcoming them that are more important.

It is so in every allegorical semi-mystical load of malarkey.

This is story of my wok, or rather My Current Wok. We did not come to each other both wearing virginal white. I had flings and dalliances with several woks over the years. All of them, like My Current Wok were made of mild steel – I’m not a teflon kinda guy and fancy stainless steel just didn’t seem fit for purpose for a wok. When was the last time you saw a Bangkok street hawker sizzling a battered rat in a stainless steel wok? Exactly my point!

The trouble was, all those woks had let me down eventually. No matter how much I pampered them they’d all eventually developed a mild case of rust and no matter what I did afterward to try and save them they lent a dreary taste of oxidisation to everything they touched. My lesson here was that not all mild steel is created equal.

Some years ago SheWhoMustBeFed and the VegHead spent four years living on Long Island (NY). A few miles down the road was a Thai Restuarant. The soul destroying expanse of the strip mall carpark that was its location belied the cheeriness inside, and more importantly the tasty produce of its kitchen.

All the cooking took place in full view of the patrons, with the chefs busying away behind a chest high divider. Flames regularly leap toward the exhaust fans as the hot oil from their creations splashed onto the gas flames. Their woks were battle hardened – coated black inside and out with the baked on seasoning of endless oily use.

We noticed that they were selling a dozen or so new woks “The same as we use here in our kitchen”. Mild steel, sturdy varnished wooden handle with a steel rod running through it, ending in a closed hook to hang it. No lid. US$6.50. My heart was filled with the memories of past betrayal as I looked on it’s bright, fresh bowl. But hey…six dollars fifty and I needed a wok so what the hell…

How gloriously seasoned My Current Wok has become. The mild steel of the bowl is The Right Stuff. Even the handle has retained it’s fresh varnished look.

Even better, the perfect wok lid came into our lives about 6 months after we first got The Current Wok. One night I needed a lid in order to successfully cook whatever it was I was doing for dinner. Looking in the cupboards to see if anything would fit I grabbed the largest of our set of nested stainless steel mixing bowls. This one was deeply bowled and at some point it must have been dropped on the floor, as there was a tiny dint inward just at the edge of the flat base – about the size of a little fingernail.

The lid fitted into the bowl of the wok better than Cinderella’s foot fitted the glass shoe.

By mid morning the next day the bowl had officially been paired with the wok, and their union consummated through the act of drilling a hole in the centre of the bowl’s flat base. Through this a small wooden knob type handle was screwed on – a spare kitchen cupboard type knob that emerged from the depths of my tool box. Another smaller hole (1.5mm) was drilled where the dint was, to allow steam to escape.

My Current Wok is not without needs.

Here is how I keep it happy;

We’ve been together now for almost eight years, my wok and I. I think that she liked that I made her a bonny lid, so she has remained faithful to me throughout. Love your wok, and it will love you back..

Ffffsssssst….That’s the sound I can hear from downstairs.

SheWhoMustBeFed is doing her weekly task of pressure-cooking up a weeks worth of dried beans. This is a once a week task that provides all the beans in whatever we then cook. Almost every week we pressure-cook up a batch each of chick peas, butter beans, and one other.

The first two are staples in a number of other recipes that we cook every week (not that I’ve posted anything with butter beans in it yet but by the end of this week I will have). The latter we change depending on what we’ll be cooking later; haricot, kidney, black, adzuki, black-eyed….

This process is much cheaper than buying precooked tinned beans, and comes with a lower “footprint” than using the more heavily pre-processed and packaged tins.

Tune in to the ridgesong via Email

A Mountain of resistance to Coal Seam Gas