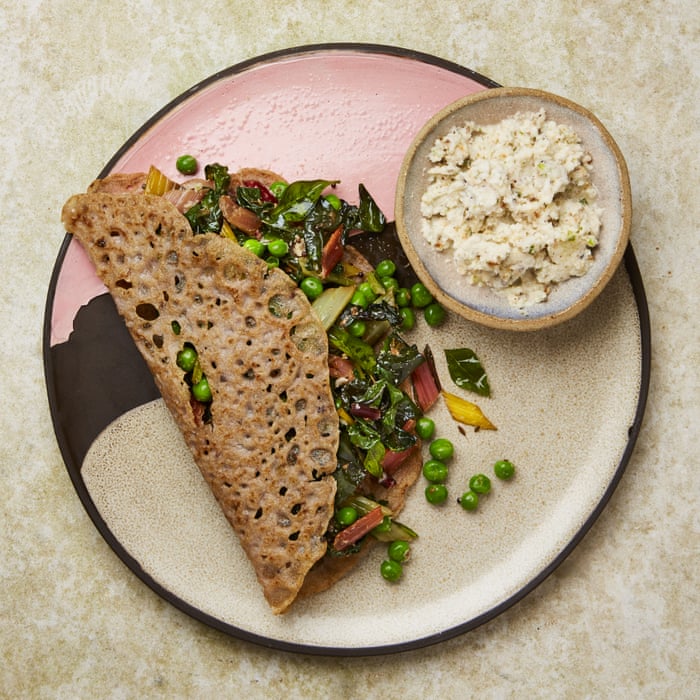 I don’t go out for Indian food much, but when I do, it is for one of two reasons: exceptional cooking or dosas.

Dosas haven’t historically been a home cook’s friend, and I understand why. Few hungry people can wait a day for the batter to rest. But when buckwheat is introduced, the game changes: suddenly, dosas can be made in a matter of minutes, not days. For that reason, they’ve become one of my favourite reasons to stay in.

This dish consists of three separate elements: the dosa batter, the coconut chutney and the vegetable filling. If you’d rather not tackle all three at the same time, ditch the greens entirely and divide the spiced oil between the chutney mix and the batter instead.

Have faith in the buckwheat dosas, too: the key to success is to make them in a nonstick pan on a very high heat – it needs to be very hot indeed – and make sure you leave them to crisp up properly before even thinking about flipping them with a spatula. The first pancake will inevitably fail – such is the universal law of pancakes – so make it a small one, so as not to waste too much batter.

Put the desiccated coconut in a heatproof bowl with a third of a teaspoon of salt, cover with 275ml boiling water and leave to soak.

Meanwhile, put the buckwheat flour in another bowl with half a teaspoon of salt. Slowly pour in 450ml water, mix to a thin batter, then set aside.

Put the oil in a nonstick frying pan and get it really hot, then add the curry leaves, cumin, mustard seeds, garlic, ginger and chillies, and fry for two to three minutes, until the garlic turns a pale gold. Carefully tip into a heatproof bowl to cool. Keep the pan for later.

When the spiced oil has cooled, stir two tablespoons of it into both the coconut mix and the batter. Tip the coconut into a blender and blitz until really smooth (add a little more water, if need be).

Reheat the frying pan over a high heat and, when hot, add the rest of the oil and spice mix, followed by the chard stalks. Fry, stirring, for three minutes, then add the leaves and cook until wilted. Throw in the peas, cook for a couple of minutes, until everything is nice and hot, then stir through a couple of tablespoons of the coconut chutney. Scrape out into a serving dish, wipe the pan clean with kitchen paper and put back on the heat.

Once the pan is really hot, brush the surface with a fine layer of oil. Add a small ladleful of batter and swirl it into a thin layer – a few gaps and bubbles are fine, because they can help the dosa get crisp. Cook the dosa for two minutes, until the edges are visibly crisp and browning, then gently lever up with a spatula, flip and cook for a further two minutes on the other side, before turning it out on to a plate. Repeat with the remaining batter, oiling the pan between each dosa.

Serve the dosas with the greens and remaining chutney on the side.